Interview with Li Tying, The Baker Behind The Spatula and the Pen

Li Tying's interview is one of the many stories from our book, In Time, We Blossom. If you'd like to read more stories like this, you can download our free e-book here.

Li Tying pours her heart into her many passions—she’s the baker behind The Spatula and Pen, co-founder of The Wild Granola and a fitness trainer. Her newest passion is being a mum to her 6 month old son, Zideon. Li Tying’s journey started off with her struggling with her loss of freedom and identity, both physical and emotional. She has emerged stronger as a result of her journey, and here she shares much of what she learned as she and her husband Chuan Kai grow together as new parents.

Did you always want to be a parent? What was the early journey like?

Yes, we always planned to have a baby, but it was more an idea for the future—with no time frame in mind. So, when we fell pregnant, it was a surprise. However, we viewed it as a blessing, since parenthood was a big part of our plans. That said, nothing had prepared me for the toll pregnancy takes on a mother’s body and mind. I spent the bulk of my pregnancy feeling upset. Fear, uncertainty, and nervousness dominated my thoughts.

I have always been very active, especially in my career as a personal trainer and baker. It upset me greatly that life as I knew it was due for a big change. 6 months into the pregnancy, we were told during a routine scan that Zideon had not grown for 4 weeks. The solution was to slow down my activities drastically, to direct nutrients and blood flow to the baby.

The sacrifices at this stage felt painful; I was putting my own body and fitness aside, even though I felt just fine. I had to deliver by caesarian, for Zideon’s well-being, and again, this was an enormous setback for my body. Recovery took much longer than hoped or expected, and struggling to even walk was a debilitating feeling.

What changed as you went through the pregnancy?

Today, none of this seems as important as it did then. The big shift came when I gave birth and became a mum. I realised that everything I had focused on, namely myself, was no longer of primary importance. Instead, there was a sudden and very natural shift in priorities. I wish I had known during my pregnancy, how much this baby was going to shift my mindset. I wouldn’t have sweated the small stuff and would have enjoyed my pregnancy more.

Pregnancy was tough on me physically, and therefore emotionally; but I realised that I became stronger as a result. Physically active people will feel similarly devastated, when faced with having to stop, slow down and regress. Looking back over the past few months, I have worked to rebuild and regain strength, and this has benefited me in terms of confidence, resilience, and self belief.

Fitness is your passion as well as your career. What helped you rebuild this after pregnancy?

I approached it one day at a time, just juggling motherhood with physical recovery. I broke my goals down into achievable chunks, to give myself something to look forward to. Simple small goals like walking without pain, or sustaining 15 minutes on the treadmill became small victories to look forward to and celebrate.

Interestingly, being a parent put a lot of my urgency into perspective, and helped me pace myself. It was more important to bond with Zideon and take care of him while pushing myself gradually to regain strength. The first 2–3 weeks were frustrating but then I relaxed into the process. I felt immense respect for all the mothers who had done this before me and overcome each of their challenges, and I was secure in the knowledge that my time to rebuild would come. 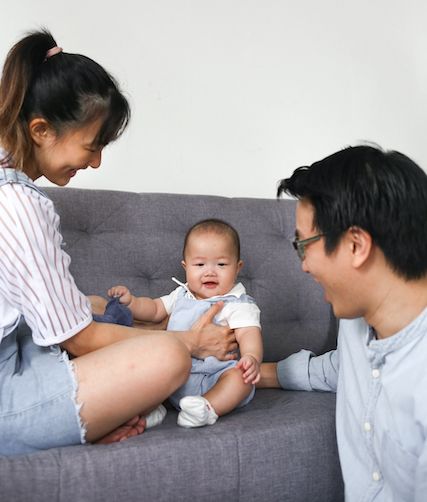 What did it feel like to become a mother for the first time?

Other mothers had warned me that love at first sight was not guaranteed so that I would not panic if I didn’t feel an instant bond with my newborn. This helped set my expectations.

Sure enough, when Zideon was born and was handed to me, I felt a sense of wonder and curiosity at the new life in my arms. This was followed by fear, as I did not know what to do as a new mum. To force myself to look at the positives and inculcate gratitude, I decided to log a daily diary of Zideon on Instagram. This, for me, was a means of staying positive through the challenging first 6 weeks. I forced myself to record every good moment that I could discern. I feel this really kept me going, and gave me opportunities to give thanks each day.

Women are a lot stronger than we realise —becoming a mother showed me how
- Li Tying, on recovering from pregnancy and giving birth

How has your relationship with your husband changed or grown since you became parents?

I always believed that one’s relationship with their spouse must come first, in order to set an example for our children. However, the emotional bond that comes from caring for a tiny baby blindsided me. Our lives currently revolve around him, almost all our discussion and decisions center on Zideon—this is a big change to our relationship. Perhaps in the future, we will be able to focus on our relationship in the way that we used to, but for now, life as we know it has changed with a 6-month-old in the mix.

Before fatherhood, my husband enjoyed his social life, freedom and personal space. When we fell pregnant, I worried about how this might impact him but he stepped up admirably to the change in his life. He successfully juggled his priorities and started to take on more responsibility, even while I recognize that he misses his old life. I appreciate his efforts to prioritise Zideon. These moments are fleeting and precious. 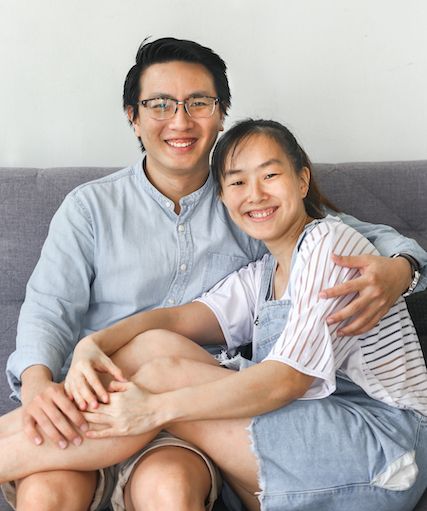 What advice would you give to your younger self?

1. Nothing is permanent
You can regain the parts of you that were lost, if you work your way back to it.

2. There is nothing to fear!

3. Motherhood is fulfilling
Thinking beyond yourself makes you happy.

Added to your cart: